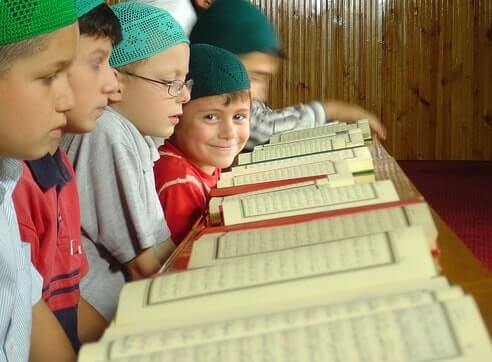 Anas said: “He (Prophet) would elongate it, so when he read ‘Bismillah-irRahman-ir-Raheem’, he would elongate Allah, ar-Rahman, and ar-Raheem.” (alBukhari).
Multiplication of Reward: Every person who recites the Qur’an purely for
Allah’s sake will receive reward, but this reward is multiplied if the recitation is
accompanied with attentiveness, contemplation and understanding of what is being
recited. If it is done in this manner, each recited letter will be multiplied from ten
to seven hundred times.

Daily Recitation: The companions of the Prophet () would recite the
Qur’an daily, and none of them would make a habit of reciting the whole Qur’an in
less than a week. Rather, they were prohibited from reciting it in less than three
days.

Thus my dear brothers and sisters, spend your time in reciting the Qur’an. Set
yourself a fixed amount to recite daily, and do not leave it no matter what happens,
since a small amount recited regularly is better than a large amount recited
occasionally. If you forget or fall asleep, make up that recitation on the next day, as
the Prophet () said: “Whoever falls asleep and fails to recite his portion of the
Qur’an, or part of it, and then recites it between the Fajr and Žuhr prayer of the
following day, it will be written for him as if he read it at night” (Muslim).

Do not be of those who neglect the Qur’an or forget it in any way, such as
failing to read it, recite it, not contemplating its meanings, not putting its teachings
into action or not seeking the cure of illnesses by it.

Start your Quran journey now by learning how to read Quran online.

5 Things Muslims Should Know about Prophet ’Isa (as)

Prophet Muhammad the greatest man who ever walked the face of earth!