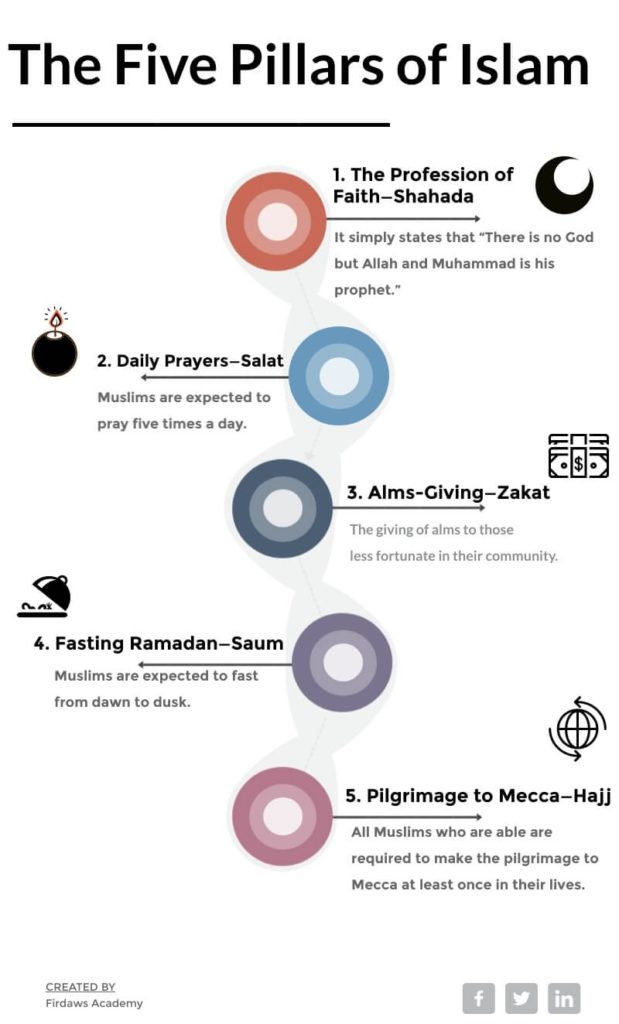 Zakat is the compulsory giving of a set proportion of one’s wealth to charity. It is regarded as a type of worship and of self-purification. Zakat is the third Pillar of Islam.

Zakat does not refer to charitable gifts given out of kindness or generosity, but to the systematic giving of 2.5% of one’s wealth each year to benefit the poor.

The categories of wealth upon which Zakah is obligatory are four:

Zakah is obligatory if five conditions are met:

3)ownership of the ““Nisaab” (amount upon which Zakah becomes due);

5) completion of a year, except in the case of produce.

The Zakah of freely grazing livestock is of three kinds:

sheep. The Zakah on them becomes obligatory on two conditions:

free grazing for a year or more;

2) They are for kept milk and reproduction and not

tor work. If they are for sale or trading, they are then considered trade items.

for every 40, a two-year old she-camel is due; and for every

Less than 30 cows: there is no Zakah on them.

Zakah of Sheep and Goats:

It is obligatory upon three conditions:

raisins and dates of fruits. But that which is not measured by amount and stored, like

fresh vegetables and legumes, have no Zakah;

2) It reaches the minimum amount.

3) The person who will pay the Zakah has the

produce in his possession at the time when it is obligatory to pay Zakah, i.e., when

the signs of npeness show on the fruit and crops and they are ready for harvest.

The Zakah on Agricultural Products:

# Products that are produced without

efforts of irrigation, thus being the product of rainwater or free flowing streams and

produced by effort and labor in irrigation is 5% (1/20th). # That which is partially

by effort and partially without, is according to the greater of the two; the counting

would be according to the number of the days that effort and labor is used.

The Zakah on Moveable Valuables:

1) Gold: Zakah is due on gold only when it reaches 85 grams;

2) Silver: Zakah is due on silver only when it reaches 595 grams.

Zakah is due on money in any of its forms and currencies (e.g., bank notes)

when its value is equivalent to the amount of the gold or silver mentioned above.

country, Zakah should be based on whichever of the two works out better for the

Jewelry and ornaments that are for daily use have no Zakah on them. However,

what is used for trade and savings must have the Zakah paid on them. It is allowed

for women to wear what is customary of gold and silver jewelry. It is allowed to put

a small amount of silver on utensils, and it is also allowed for men to have a small

amount of silver in the likes of a ring and glasses.

minute amount in something that is used for some other purpose, like a button or a

gold tooth, without them resembling women.

If a person has wealth that fluctuates, increasing sometimes and decreasing at

others, then he should specify a day when he takes inventory and calculates his

Those who are salaried or who have fixed incomes from rental real estate properties,

for instance, have no Zakah due on them unless they save some of that

amount. They must pay the Zakah of the saved amount if a complete year passes

while the saved amount is in their possession. If it is difficult to calculate, They

simply choose a day to reckon their account as mentioned above.

If a person loans some money to a rich person, or if the debtor

has sufficient funds and it is possible to get the money back from him, the Zakah for

years that lapsed, even if they are many.

But if the debt is with someone who is bankrupt, there is no Zakah due since the

person is not certain about its recovery and has no control over it.

There is no Zakah for trade items except with four conditions:

payer of the Zakah owns them;

2) That he intends to trade with them;

3) That they reach the minimal amount, which is like that of gold and silver (whichever is lesser);

4) That a year has lapsed while these items are in his possession.

If these four conditions are fulfilled, he must pay the Zakah due from the value of the inventory.

If one intends to use the trade items for private use, like clothes, house and car, there is no Zakah due on them.

It is obligatory on every Muslim who has food that is surplus to his needs and the needs of his family members on the last night of Ramadan and Eid Day.

it is being given. This amount is per person, male or female, and his dependants.

It is beloved to give it out on the Eid Day before the prayer of the Eid. It is not

before Eid. One may also give to one person an amount of food that is enough for a group and vice versa.

guardian is responsible to give Zakah on behalf of children and the insane.

to the people. Intention for the person on whose behalf the Zakah is given is necessary.

Zakah, even if the person gave all his wealth away.

person lives but in case of some overwhelming need, sending it to other countries 1s

also allowed. Giving Zakah two years in advance is proper and allowed, if the

wealth reaches the amount where Zakah becomes due.

1) For the poor and utterly destitute;

2) For the poor who are needy;

who collect and distribute it;

4) For those who need additional attraction to Islam,

whether Muslims or non-Muslims;

5) For the liberation of slaves and captives;

6) For helping people who are burdened with legal debt;

7) For those who are struggling in the way of Allah in Jihad; $8) For the travelers who are cut off from their homeland.

rebelled against a righteous Imam) and the likes if they take control and rule the land.

It fulfills the obligation if the ruler takes the Zakah by force or by one’s consent,

and whether he is a just or an unjust ruler.

It does not fulfill the obligation to give the Zakah to a non-believer (other than those who need additional attraction to Islam), a slave, rich person, one’s dependents, or a member of Bani Hashim (descendents of the Prophet.

comes to know about it, his obligation is not fulfilled except for the case that he gave

to someone thinking that the person was poor and later on found out that he was rich.

The Messenger of Allah said “Verily, what reaches a believer of his good deeds after his death is: knowledge that he taught and publicized; a pious son who supplicates for him; a book of Qur’anic script

(Mus’haf); a Mosque that he built; a rest house that he built for the travelers; a water canal that he made; and any charity that he spent while healthy and alive; all this will reach him after his death.” (Won Maajah).

How to memorize the Quran easily? 15 steps

what is the importance of tajweed