why should we read the Holy Quran? 20 reasons

Alhamdlilah, and All perfect thanks and praises are due to the Almighty
Allah, who has brought down the Qur’an. I send peace and blessings
upon whom the Qur’an was descended upon, Prophet Muhammad, his
household, his companions and all those who follow his guided path till
judgement day.

The Prophet said, “The best among you (Muslims) are those who learn
the Qur’an and teach it.” Maximizing the intentions is the trade of the
hearts of the sahabah (May Allah be pleased with them) and the scholars,
and those who know Allah very well.
They used to carry out one action whilst having many intentions
behind this action, so that they are rewarded abundantly for every
intention. It is due to this that Ibn Kathir said, “The intention reaches
further than the action”.

1- For it to intercede for us on the day of judgement. The prophet 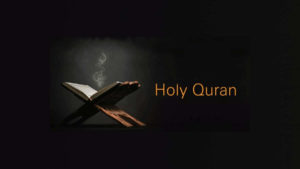 (PBUH) said, “Recite the Qur’an for it will come as an intercessor for its
people on the day of judgement” [Reported in Muslim].

2- So that we can increase in reward. Abdullah ibn Mas’ud narrated the
prophet mentioned that “whoever recites one letter/word from
the book of Allah, then for him is a reward, and a reward is multiplied by
ten” [Reported in Tirmidhi].

3- For it to fill our heart. The prophet (SallaAllahu ‘alayhi wasallam)
said, “The man who has nothing of the Qur’an inside him is like a ruined
house”.

4- For us to memories and act on every verse we recite so that we can
ascend in Jannah. The prophet (SallaAllahu ‘alayhi wasallam) said, “It is
said to the one who recites the Qur’an, recite and ascend, and read like
you used to read in the dunya, for your place (in Jannah) is at the last
verse you recite” [Reported in Abu Dawud and Tirmidhi]

5- For it to remove the illnesses from our hearts and cure our bodies, and
for mercy to envelope us. Allah says in Surah Al-Israa’ [17:82] {We send
the Qur’an as healing and mercy for those who believe}.

6- For it to give our hearts tranquility and peace. Allah says in Surah 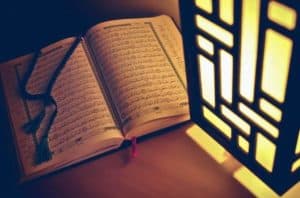 7- For it to give life to our hearts, light to our chest, and to remove our
anxieties and worries. The Qur’an is the spring of the believer, as rainfall
is the spring of the Earth. The prophet (SallaAllahu ‘alayhi wasallam)
used to say in his Du’aa “. that you make the Qur’an the spring of my
heart, the light of my chest, the remover of my sorrow, and the remover
of my worries” [Reported in Ahmad].

8- For it to guide us. Allah says in Surah Al-Baqarah [2:2] {This book of
which there is no doubt, (is) guidance for the pious}. And in a hadith
Qudsi, Allah says, “Oh myslaves, you are all astray except those whom I
guide, so seek my guidance and I will guide you” [Reported in Muslim].

9- For us to die while reciting the Qur’an as Uthman (RadhiyAllahu
‘anhu) became a martyr whilst reciting the Qur’an. Ibn Kathir said,
“Whoever lives upon something will die upon it, and whoever dies upon
something will be resurrected upon it”.He based this on the verse in Surah Al-Jathiyah {Do those who commit
evil deeds really think that We will deal with them in the same way as
those who believe and do righteous deeds, that they will be alike in their
living and their dying? How badly they judge!

10- For it to bring us closer to Allah by loving His words. The prophet
(SallaAllahu‘alayhi wasallam) said, “You are (on the day of judgement)
with whom you love”.

11- For it to increase our Iman. Allah says in Surah At-Tawbah [9:124]
{And when a surah is revealed, some of them ask “which of you did this
increase him in Iman?”. As for the ones who believe, it increased them in
Iman and they rejoice}

13- For it to be a reason for Allah to make us from His people. The
prophet said, “Allah has His people (from the creation)”. The sahaba
asked, “Who are they?”. He (SallaAllahu ‘alayhi wasallam) replied,
“They are the people of the Qur’an. They are Allah’s people, and His
close ones”.

14- For you to fulfil the purpose of the revelation of the Qur’an by
contemplating on its verses and acting upon it. Allah says in Surah Sad
[38:29] {A blessed book we have revealed to you so that they may
ponder over its verses and so that it serves as a reminder for those with a
heart}.

16- Reading the Qur’an Puts You at Peace and Tranquility. Believers
attain their inner-peace and solace through remembering Allah. And the
best form or remembrance is reading the Qur’an. Every verse in the
Qur’an serves as remembrance (Dhikr). But not every Dhikr serves as
Qur’an. With inner peace, you won’t have trouble in managing crisis of
this testing world. With solace, bigger problems become small, and
smaller ones become non-existent, in sha Allah. Once you are put at
peace and tranquility, you are set for the tenfold of rewards per letter,
guaranteed for Qur’an readers.

17- Reading the Qur’an Leads to Understanding it. 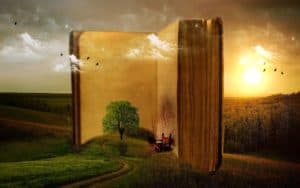 18- The First Command and Word of the Qur’an was “Read!”. Yes, you
read it right. The first word that was revealed in the Qur’an was a
command which says: “Read!” In other words, the first verse that was
descended upon our beloved Prophet ṣallā Allāhu ‘alaihi wa sallam
commanded him to “Read!” Thus, the first encounter of the Prophet with
the Qur’an was reading. Therefore, you should read. Read… read…
and read the Qur’an even if you don’t understand it. It all starts with
reading.

19- Reading the Qur’an Protects You from Transgression and Immorality.
Being protected from transgression and immorality is that you will be
protected from getting involved in acts that lead to them. To simplify this,
I’d say, help me to search for someone who recites the Qur’an every other
day. The minimum is one verse, but most importantly this person reads it
every day. If you find him, my assumption is that you will see him in a
higher level of morality and kindness if he’s compared to any Muslim
who doesn’t read the Qur’an every day.

20- From the greatest intentions that we can have and the most important
one is to intend to this as an act of worship, as it was commanded and
legislated by Allah. Allah says in Surah Al-Muzzamil [73:4] {And recite
the Qur’an} After reading all of this, have you ever asked yourself what
your reason or intention is when reading the Qur’an? And will you carry
on constraining it to just one intention only?

The Virtues of Reciting Qur’an

10 Facts about the Holy Quran